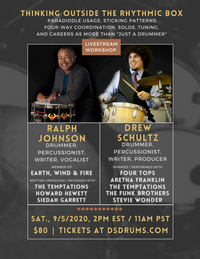 Livestream Zoom Workshop with Ralph Johnson and Drew Schultz. Ralph Johnson is a principle member of Earth Wind & Fire - since 1972, he has acted as drummer, percussionist, vocalist, songwriter, and more for the iconic group that holds 6 Grammy Awards (with 17 Nominations), has sold over 90 million records, and has been inducted into the Rock & Roll Hall of Fame and received the Kennedy Center Honors. His writing and production work has also been heard on songs with The Temptations, Howard Hewett, and Siedah Garrett. Drew Schultz is a drummer / percussionist / songwriter / producer who has worked on stage and off with artists and institutions including Motown Records, Modern Drummer Magazine, Aretha Franklin, The Four Tops & Temptations, Stevie Wonder, and more. This livestream workshop will be held via zoom, and will touch on topics including four-way coordination, solos and improvisation, paradiddle usage and sticking patterns, tuning, and careers as "more than just a drummer." 2pm EST / 11am PST, $80.